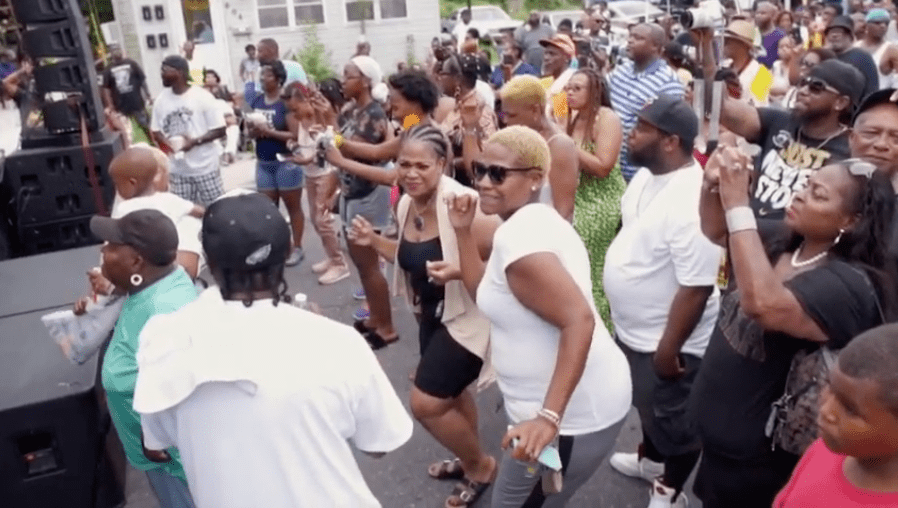 “You Don’t Know Nothin’ Bout Groove City,” a 60-minute documentary produced by WHCP in conjunction with a community advisory committee, debuted at the Dorchester Center for the Arts February 29. For more than an hour, a standing room crowd of 250+ people watched the story of Cambridge’s identity as “Groove City” unfold on the screen. And for an hour afterward, the audience participated in a frank discussion on race relations in Dorchester.

The powerful documentary was a labor of faith and fortitude for Cesar Gonzalez, Pastor of the Cambridge Seventh-Day Adventist Church and WHCP board member. Gonzalez – along with the rest of the board – only learned about Cambridge’s rich musical history when the station opened at 516 Race Street and named a companion performance space “Groove City Studio.”

The studio name sparked a debate among members of the city’s African American community who printed t-shirts proclaiming, ‘You don’t know nothing about Groove City.” A flood of commentary and criticism soon followed on social media as the board quickly discovered that Cambridge’s Black community rebuked the idea that the ‘white part of town’ had any claim to the Groove City moniker.

After speaking with many people who had posted on social media, Cesar realized that a lack of knowledge and understanding was at the root of conflict. WHCP founder Mike Starling invited community leaders, Jermaine Anderson and Adrian Green of Alpha Genesis, to meet with the board.

“We had a wide-ranging conversation about Cambridge’s history and understood how we had unknowingly claimed a piece of that heritage by naming the studio based on a narrative the white community didn’t own,” said Gonzalez.“Cambridge earned the name Groove City. We have to talk about the city’s history, about Pine Street. Cambridge can be a leader in race relations and there’s a growing group of people including the Eastern Shore Network for Change and Alpha Genesis who are dedicated to this.”

During the meeting, Adrian suggested ‘it would be great to have something to tell the story.’ That something was intended to be a 5-minute video.

An Idea Morphs into a Feature Film

With experience producing live to tape videos, Cesar volunteered to manage the project. A subcommittee of residents and subject matter experts provided advice, content and context to ensure an accurate narrative.

Once underway, a bigger story requiring more filming quickly unfolded. With his nephew Didier Brival serving as Director of Photography, production swelled to over a year. And, while it was hard at times to find people willing to sit down and talk about racism, Gonzalez said the resulting conversations were incredible. More than 30 hours of interviews were transcribed, providing a rich and robust historical record.

By the time a 40-minute cut was shown to the board, the film wasn’t finished and “we still had a lot of work to do.” After 18 months – and now 60 minutes long – the documentary debuted. Produced for only $6,500 (none of which went to Cesar), and thanks to the support of individual and organization donations, Gonzalez is making additional edits to reflect current events and evolving impact of the Black Lives Matter movement.

Cesar is very clear that while the film is about Cambridge’s Black history, it was made for white people. As a person of color, this Panamanian-born and Miami-raised Latino brought a unique perspective to the project.

“I could see from my dealings with both sides of the community that each were ignorant of one another’s lives. People share moments, but their experiences and lives are vastly different. We have to educate our community and provide the background for understanding and healing.”

Organizers originally planned to host numerous showings at community, faith and business organizations. But the screenings were shuttered during the quarantine.

You Don’t Know Nothin’ Bout Groove City was unanimously selected in May as an official entry for the 13th Annual Chesapeake Film Festival (online, Oct. 1-4). Gonzalez hopes to schedule future screenings for the community and is hoping to find a film distributor.

As pastor of Cambridge’s Adventist Church since 2008, Gonzalez has been instrumental in bridging community divides, including food for 300 families and PPE distribution during the pandemic. One partnership he is particularly proud of is “FLAG (Fun Learning About God) Camp,” a summer academic and recreational camp.

Launched as a one-week camp in 2014, it quickly grew to six weeks serving 65 youth in partnership with the Pine Street Committee. He credits the Empowerment Center’s amazing staff over the years — Joyce Green, Barbara Bishop,  and Portia Ennels – for its success.

FLAG Camp returned last week. Unfortunately, due to the ongoing pandemic, this year’s capacity was reduced to 30 youth to uphold current safety protocols. The program costs $130 per child a week; the church raises $32,000 annually to host the camp.

Church is not a building; it’s people.

As Cesar reflects on the past four months in his congregation, community and country, he offered these final thoughts:

“If you are the same as you were in February then something inside you was dead. If this time has not changed you and made you realize how fragile the world is and that we have to take care of each other, then you’ve been living in a bubble. Today, we have a higher responsibility to focus on social justice versus good deeds.”

To learn how you can support FLAG Camp or host a screening of You Don’t Know Nothin’ Bout Groove City, email Pastor Gonzalez at c4gonzo@mac.com. View film trailer.