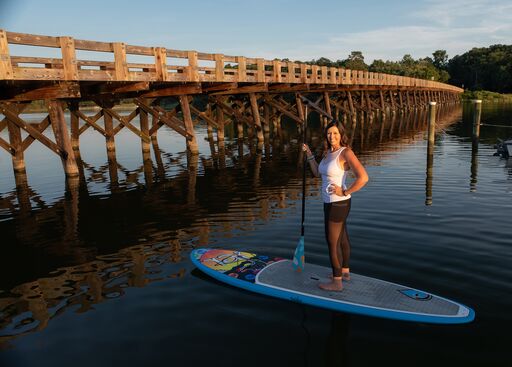 With a dozen fitness certifications under her belt, Angela Thomas chose to follow her heart and open a stand-up paddleboard and yoga business. Launching from pristine waterfront throughout the county, she leads hundreds of classes and outings on her state-of-the-art fleet of boards and flotation fitness mats. She is also a 200-Hour Registered Yoga Teacher (RYT) and licensed Ashaya Yoga® instructor. Learn how water inspired this fitness guru to launch her business.

Inspired to make people happy – and healthy – through wellness, Angela had already earned a reputation as an exceptional fitness instructor in Dorchester county. Teaching classes at the YMCA, Powerhouse Gym and area studios, she developed a large following of fitness enthusiasts who crowded her spin, kick-boxing, pilates and power yoga classes. 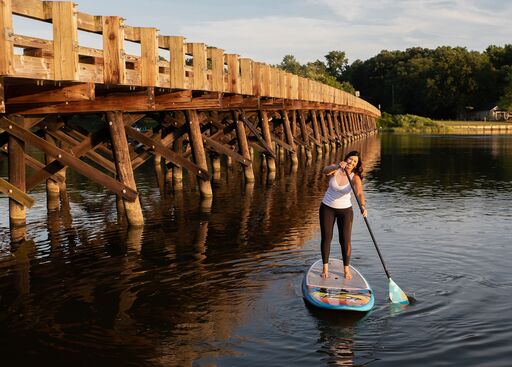 But it was the 10’ Suplove board that started her entrepreneurial journey.

“In the summer of 2012, my husband Johnny and son Seth took a SUP class with me in Ocean City. I was immediately hooked and brought four boards home,” she said. “When I couldn’t get my family to paddle with me, I started taking my girlfriends out.”

After two years leading SUP excursions, friends and family encouraged her to channel her experience and enthusiasm into a new venture. She drew up a business plan and launched Overboard Paddle and Fitness in 2014. By 2017, business quadrupled as she added new equipment, classes, and SUP tours.

Prior to starting a small business, Angela’s career included a decade at Maryland Wire Belts (now Rexnord) and 14 years at ISG International as a customer service representative/insurance agent.

She credits county business leaders she knew or worked for including Suicide Bridge GM Craig Cropper and Tourism Director Amanda Fenstermaker for encouraging her to follow her heart. 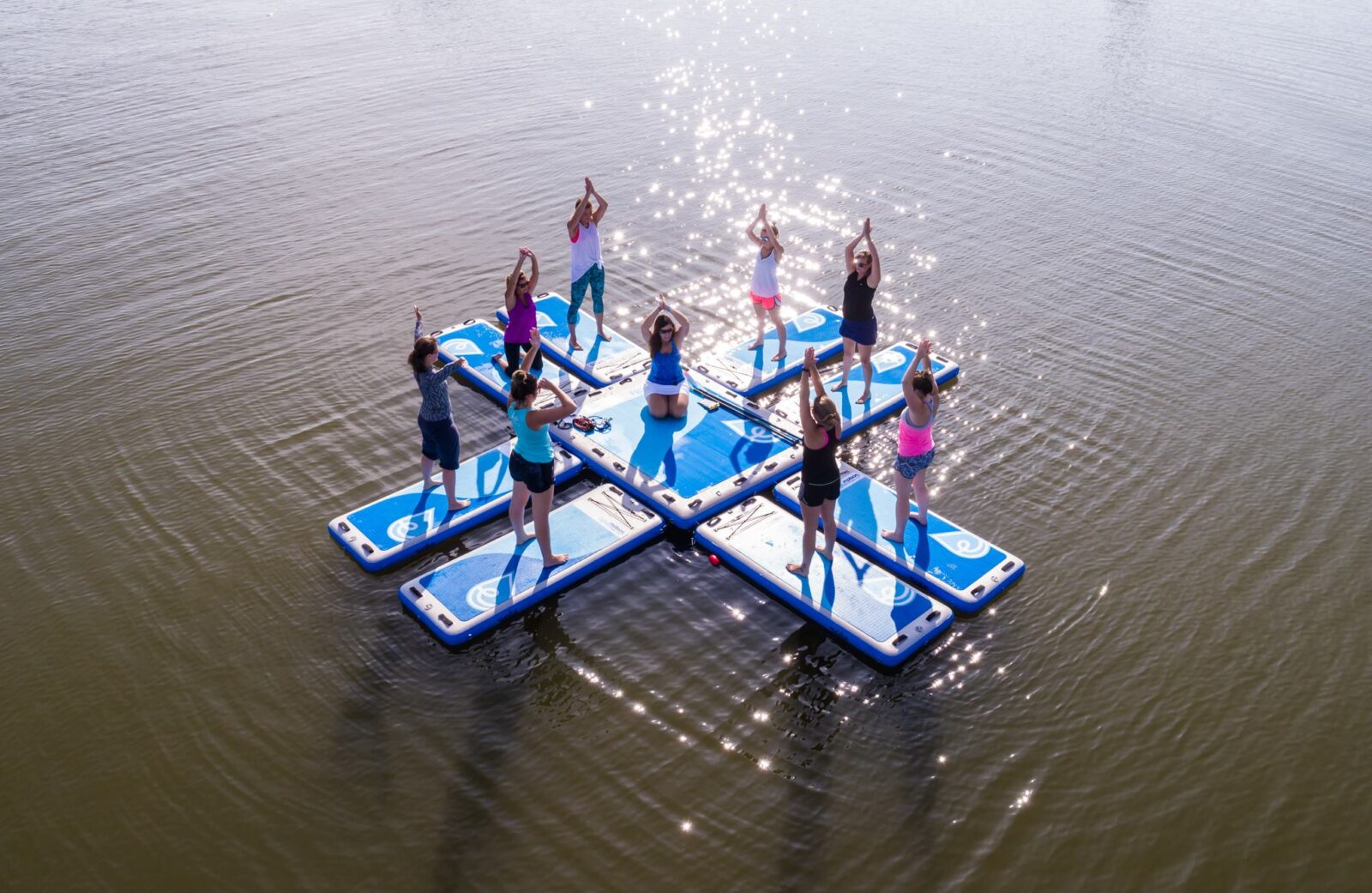 In 2017, Angela acquired a Big Buddha flow motion yoga pod and made a splash with the first and only floating fitness mat of its kind in Dorchester. Each 3’x6’ station is a cross between a paddleboard and a yoga mat. Eight mats are connected and surround a center pod where she coaxes each class through a total body workout.

“The Flowmotion Fitness Pod is magic, it’s a floating yoga and fitness studio,” she says. “You reap all the benefits and elements of the water while engaging tons of stabilizer muscles and firing your core.”

Angela also expanded her business to serve the many visitors looking for custom activities. Overboard began offering group tours and classes for weddings, birthday parties, reunions and family vacations at hotels and private rentals for groups ranging from three to 14 people. She trailers the equipment directly to visiting vacationers.

Inspired by Dorchester’s beautiful waterways – Angela never tires of her many waterfront ‘offices.”

“I love bringing people to Downtown Cambridge at Sailwinds Park. It’s amazing for beginners because the cove – located right next to our visitor center – creates a safe and accessible space to start. We literally tour Cambridge’s maritime history, paddling by the Choptank Lighthouse and marina into Cambridge Creek past Claytons, the old shipyard and Snapper’s Restaurant.”

As she looks toward the 2020 season, Angela plans to expand Overboard’s on-water experiences and excursions. Asked what else the future holds, she shares her dream of opening a waterfront Yoga and Paddle Studio. 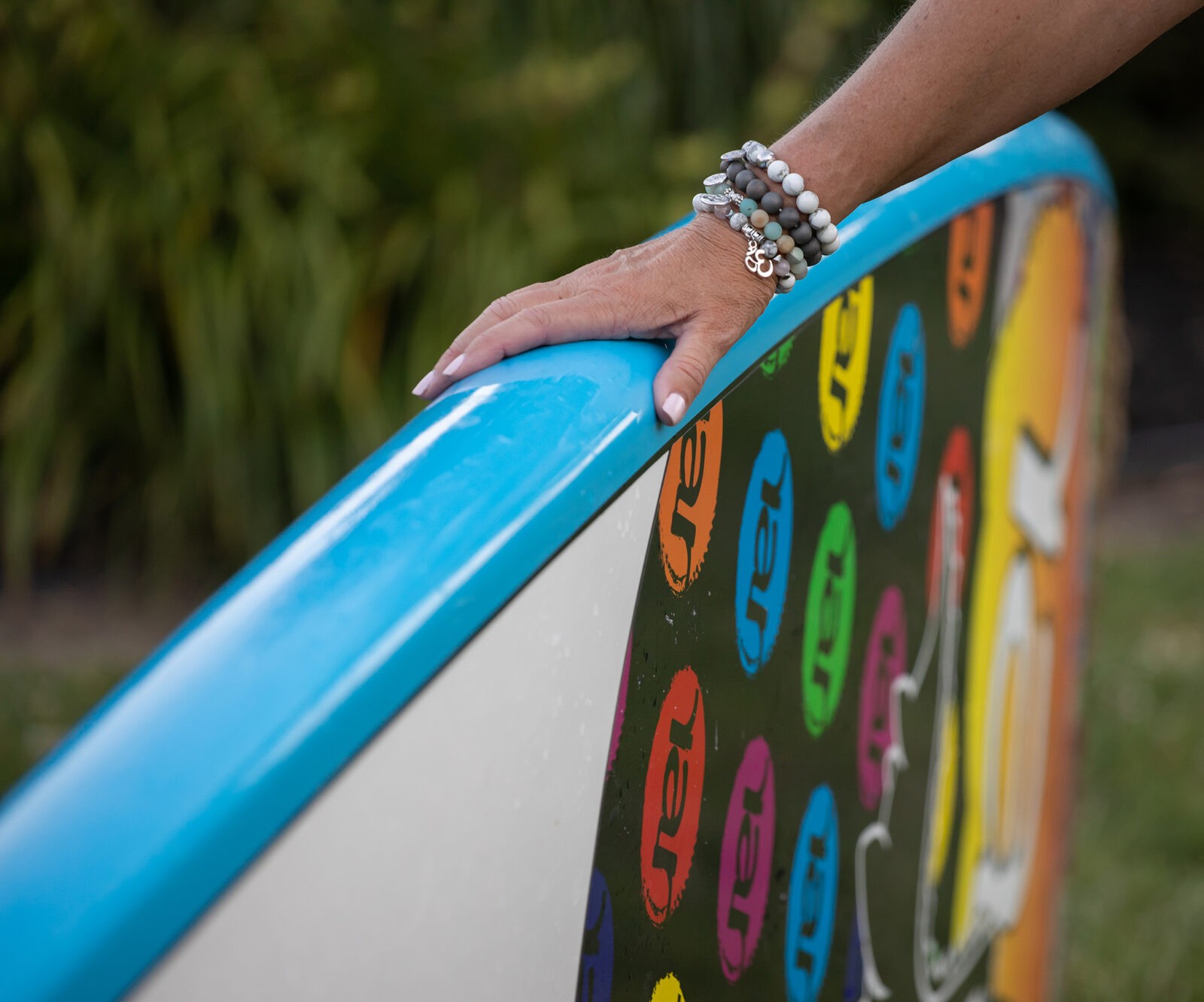